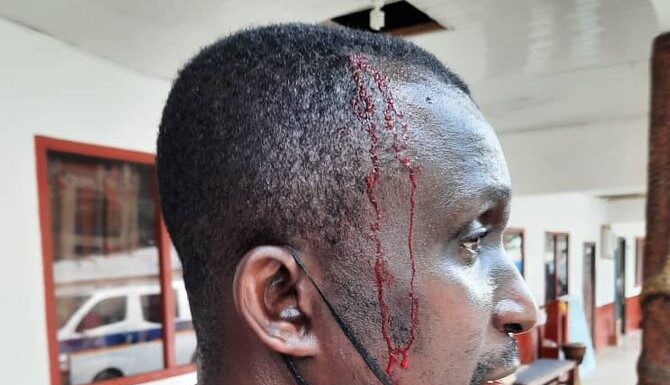 Officials of the West African Examination Council (WAEC) supervising the ongoing WASSCE examination were attacked by students of Bright Senior High School at Kukurantumi in the Eastern Region on Thursday over strict invigilation.

A journalist with the state-owned Daily Graphic was also beaten by the students during the melee.

His phone and bag were taken away by the students who chased him on a motorbike and pummeled him even as he jumped onto a moving commercial bus to save his life.

The marauding students trashed phones belonging to the invigilators.

They were angry about strict supervision and social-distancing protocols in the exam hall.

The police had to intervene to calm nerves.

The Kukurantumi incident is one of many such happenings. So far, students of Tweneboa Kodua Senior High School and Juaben Senior High School, both in the Ashanti Region; as well as their colleagues at Ndewura Jakpa Senior High Technical School in the Savanna Region, have rioted over strict invigilation and the difficulty of the exam questions.

Some of them said they were disappointed that none of the government-procured past questions they focused on, featured in the papers they have sat so far.

However, the Deputy Director-General of the Ghana Education Service, Mr Anthony Boateng, has said the authorities will deal with all the students that rioted and vandalised school property to protest against the non-featuring of past questions procured for them by the government, in their final exam.

The GES, in November last year, procured 400,000 sets of questions and answer booklets from the West African Examination Council (WAEC), for distribution to the first batch of beneficiaries of the Free Senior High School policy.

The Head of Public Affairs at the Ministry of Education, Mr Vincent Ekow Assafuah, at the time, said the intervention was needful since it will guide the students in their preparation for the exam and help them excel.

MORE:  Dec. 7: Can the Beacon of Africa’s Democracy Shine for the Eighth Time?

Mr Boateng has told Class News that the rioting “is a very disturbing, worrying and very very unfortunate development”.

“We take a very serious view of what’s going on”, he said.

According to him, “The Ghana Education Service and, therefore, the schools, have the regulations that deal with discipline. Those issues have not been compromised in any way despite the circumstances in which we find ourselves. And, therefore, any student or anybody, who breaches any of these rules or regulations, will be dealt with according to the rules and regulations of the Service”.

In his view, it was preposterous for the students to have expected the same past questions to feature in the final exam.

“I do not think, for one moment, that anybody should think that supplying past questions and chief examiners’ reports to students means that the students were expecting those questions to appear in their final examination.

“It is a very ridiculous expectation”, he fumed.

Mr Boateng said the school authorities and the GES are studying all the social media footages of the rioting and destruction and would enforce the appropriate disciplinary sanctions.

“We have seen the videos, we have even identified some of the students, the disciplinary processes have been initiated, we are monitoring the situation, the schools are dealing with the situation, we are waiting for the reports; when the reports come in, all the appropriate sanctions will be applied”, he noted.

MORE:  Dec. 7: Can the Beacon of Africa’s Democracy Shine for the Eighth Time?

“If it means even withdrawing any student from school, we will go ahead and do that; if it means deboardinising some of them, we will.

“We will take all the appropriate measures to ensure that there’s total discipline and order in the schools”, he vowed.

MORE:  90-Year-Old Woman Beaten to Death for Being a Witch
Submit