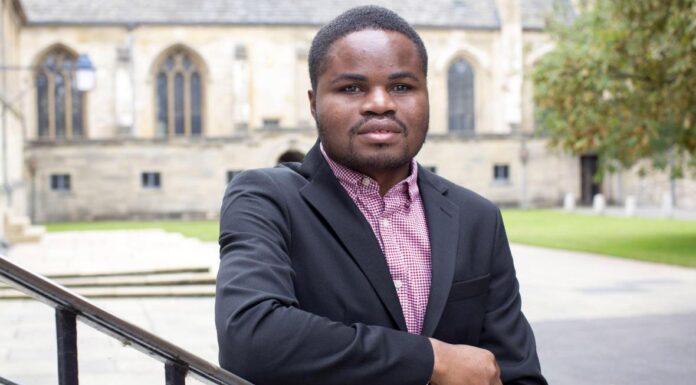 A blind Ghanaian student, Azamati Ebenezer, who was manhandled out of the Oxford Union on October 17 last year has reached an out-of-court settlement with the prestigious debating society.

A video of Ebenezer Azamati, 27, who was using a white cane, being ejected from the packed debating chamber in October last year sparked widespread protests.

On Friday the union agreed to pay Azamati a settlement understood to run into thousands of pounds.

Ebenezer Azamati was ‘pushed’ out of the exclusive debating chamber by security on October 17.

Footage of him being ‘manhandled’ went viral after the ex-president, Brandan McGrath – who wasn’t there that evening – claimed Mr Azamati was behaving aggressively and banned him for two terms.

In a statement tweeted by the union, which is independent from the university, the president apologised days later for the ‘distress’ and ‘reputational damage’.

But now, nearly a year later, the union have made another public statement saying: “Ebenezer Azamati, a member of the Oxford Union, sought to attend one of its debates. Mr Azamati is blind and Black. Mr Azamati was initially turned away. He was subsequently admitted but then steps were taken to remove him by force.

Ebenezer Azamati was expelled from a debate at the Oxford Union after he attempted to attend a talk on the motion “This House has no confidence in HM Government”.

The 25-year-old arrived early at the Oxford Union on October 17 to reserve a seat as he was worried there were no special provisions for disabled students.

He placed a book on an accessible seat near the entrance to the chamber to reserve it and went back to his college for dinner.

When he returned later, accompanied by a friend and sat down, officials refused his attendance and were seen manhandling him out of his seat.

Mr Azamati, who is a postgraduate from Ghana studying international relations, became distressed at the situation.

Video footage from the event shows the student’s white cane to be visible, while an official pulls him out of his seat.

Mr Azamati has since said he feels ‘unwelcome’ in Britain following the incident.

He said at the time: “In being publicly removed from the Oxford Union Society made me feel unwelcome in the Union, Oxford and even the country.

“I felt that I was treated as not being human enough to deserve justice and fair treatment.’

Today the statement continued: “We accept that the allegations of dishonesty and violence made against Mr Azamati by the union have caused acute distress to [him] and serious harm to his reputation.

“We accept that those allegations are wholly unfounded and untrue, and we apologise for making the statements that contained them.”