They two chief executives who have been affected are the District Chief Executive (DCE) for Amansie South District in the Ashanti Region, William Asante Bediako and Akuapem North Municipal Chief Executive, Dennis Aboagye.

They have been replaced by Barima Awuah Sarpong Asiedu-Larbi for and Akwapim North Municipal Assembly and Clement Opoku Gyamfi for the Amansie South District Assembly.

Abdul Mumin-Issah has been appointed to fill the position of the Metropolitan Chief Executive of Secondi-Takoradi in the Western Region, Anthony Kobina Kurentsir Sam, who passed away not long ago.

“In view of the above, the Hon. Regional Ministers for Western, Eastern and Ashanti regions are requested to liaise with the Regional Electoral Commission to conduct the confirmation process of the nominated Chief Executives,” the statement signed by Hajia Mahama indicated.

It is not clear what has triggered the dismissals, however, in the case of William Asante Bediako, he grabbed headlines recently for defending persons engaged in illegal mining activities in the Amansie South District.

Mr Bediako was captured in a viral video stating his disagreement with the state-sponsored clampdown on illegal mining.

According to reports, the video was shot at a ceremony to commission a toilet facility at Manso Tontokrom, a town within the district.

President Akufo-Addo launched the Operation Vanguard to quell illegal mining activities have wreaked havoc to Ghana’s freshwater bodies and vegetation across the country. 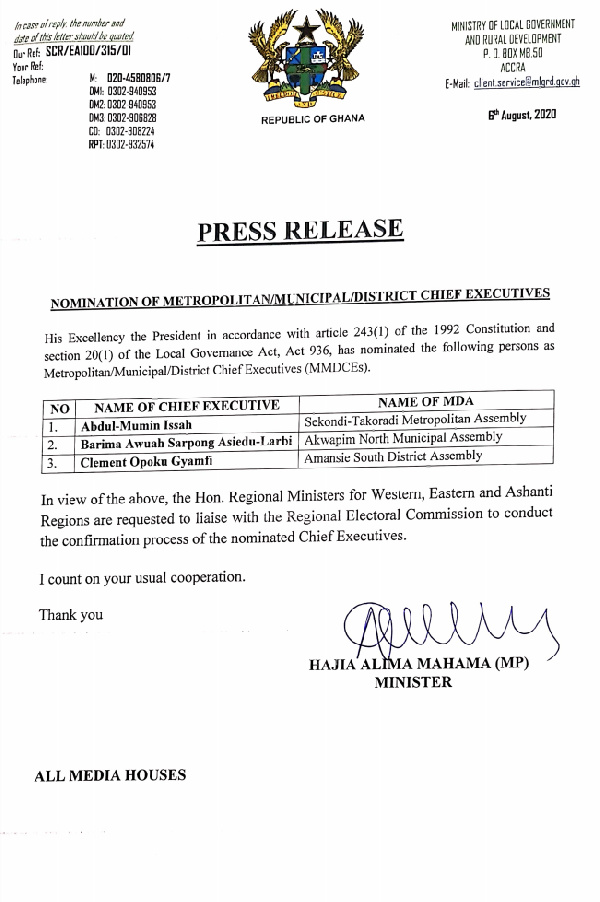 Asantehene Gets Jab of COVID-19 Vaccine as Nationwide Rollout Begins

MORE:  COVID-19: Ban on Public Gathering in Ghana extended to May 31