It is reported that Ghanaian contemporary artist, Ibrahim Mahama knitted together jute charcoal sacks into a tapestry for exhibition at a Dublin gallery that paid him $150k. The shrewd buyers cut it up into 294 pieces for Ibrahim to sign & priced each at $16,700. Ibrahim disowned the work but the buyers sued, but the court settled.

The Los Angeles dealer and artist agent Stefan Simchowitz and the Dublin dealer Jonathan Ellis King have settled their legal case against the Ghanaian artist Ibrahim Mahama. A Californian court dismissed the lawsuit on 4 May after a lengthy battle that first began in June 2015 when the dealers sued Mahama for declaring hundreds of jute sack works inauthentic, potentially costing them $4.5m.

The row centred on six lots of jute sack material, which Mahama sold to Simchowitz and Ellis King for £90,000 in 2013. The artist repurposes the coarse brown sacks that are used to transport coal in Ghana, stitching them together to create tapestry-like installations.

Mahama countersued in March, claiming that Simchowitz and Ellis King “mutilated” his work by cutting it up into around 300 pieces, and stretching and framing them to sell individually “all without any required written authorisation” from the artist. Mahama’s countersuit alleged the dealers violated the 1990 Visual Artists Rights Act, which protects an artist from “any intentional distortion, mutilation, or other modification of the work”.

However, Simchowitz and Ellis King claimed Mahama agreed to create “a series of smaller, unique art works” from four of the six lots of jute material, which they would have “the exclusive right to sell”. According to the original complaint, Mahama signed the 294 “individual works” at Ellis King’s gallery in December 2014. After an exhibition at the gallery that month, 27 pieces were sold at around $16,700 each.

In their lawsuit, Simchowitz and Ellis King demanded the artist authenticate the works. Meanwhile, Mahama’s counterclaim sought an injunction preventing the dealers from selling any more pieces from the series.

The terms of the settlement remain confidential, although the case was permanently dismissed in its entirety. Both parties must pay their own costs and legal fees. 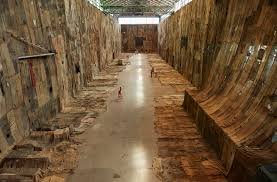