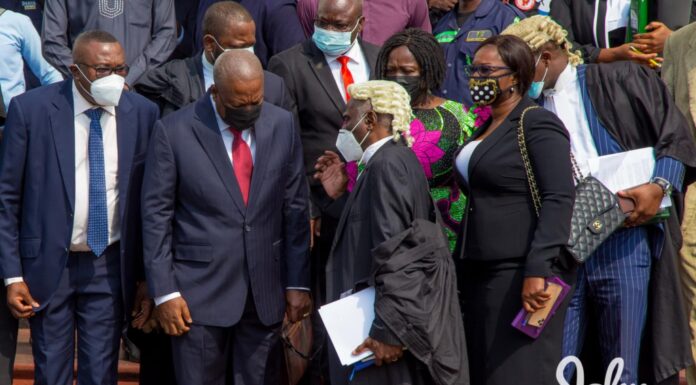 The Supreme Court Ghana has in a unanimous decision dismissed the election petition suit brought before it by Ghana’s former president and Presidential Candidate of the National Democratic Congress (NDC) for the 2020 Elections, John Dramani Mahama.

According to the court who ruled on the case today, March 4, the country’s sitting President, Nana Addo Dankwa Akufo-Addo was validly elected in the election held on December 7, 2020.

The Chief Justice of Ghana, Justice Anin-Yeboah, who presided over the petition against the election of Nana Akufo-Addo brought before the Supreme Court by the candidate of the main opposition political party, National Democratic Congress (NDC) in the election, John Dramani Mahama upheld the declaration made by the Chairperson, Jean Adukwei Mensah.

The petition was heard by seven justices of the Supreme Court with the Chief Justice as the presiding judge.

In one of Mr. Mahama’s reliefs he was seeking from the court, he had argued that none of the two candidates obtained the 50% + 1 to be declared a winner as mandated by the constitution of Ghana.