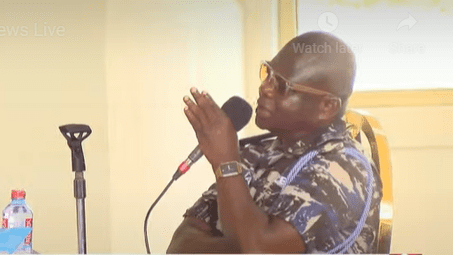 The Ejura District Police Commander, DSP Phillip Hammond has told the three member committee that is probing the disturbances that occurred at Ejura leading to the death of three persons that he didn’t not call for military support.

He said he only called for reinforcement and that did not mean that the Military must intervene.

The Chair of the Committee who is also a Court of Appeal Judge George Kingsley Koomson, for his part said the media must accept criticisms from other members of the Ghanaian society.

He said inasmuch as the media have the right top criticise, others also do have the same right to subject their work to scrutiny.

His comments come after the Battalion Commander Lt Col Kwasi Ware Peprah said no media house has spoken to him on the disturbances that occurred in Ejura yet several reports have been filed.

In response to what he said, justice Kingsley Koomson agreed with his concerns regarding the media and said among other things that we also have the right to criticize the media.”

Lt Col Kwasi Ware Peprah further told the committee that the aim of the Military was not to kill anybody during the upheaval.

“There was no plan to kill anyone during the Ejura disturbance.

“The aim was not to kill, it was just unfortunate. If the aim was to kill then hundred people would have died.”

Meanwhile, Justice Kingsley Koomson has recommended to the Ghana Armed Forces (GAF) to apply for plastic bullets to use in controlling crowd in Ghana.

He said this when the General Officer Commander- Central Command, Brigadier General Josephs Aphour appeared before the Committee on Wednesday July 7.

“I think the Military will put in application for platcis bullets we are talking at human lives, don’t be applying fir live bullet,” Justice Kingsley Koomson said.

The committee was formed by Interior Minister Ambrose Dery following the gruesome murder of Macho Kakaa in Ejura over the weekend.

There was also a violent clash among the military officers and the youth of the area who were demonstrating in that town on Tuesday, June 29 following the murder.

This led to the death of two persons with four sustaining various degrees of injury.

Brigadier General Josephs Aphour while answering questions posed by members of the Committee said “My Battalion Commander called me the day of the incident that that was happening in Ejura, the indent that we all know.

“Then I had a call from the Chairman of REGSEC that the situation was getting out of control and that there was the need  for us at Operations Calm Lives  to  move inside, if not things will get out of control.”