Elizabeth Ohene Writes: Nature Will Even It Out 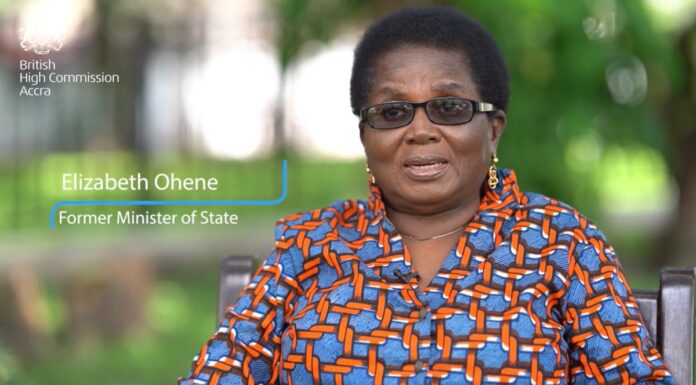 I am probably being melodramatic here, but I can’t think of a better way of putting this. My birth was political. I am the first child of my parents and the legend goes that the celebrations on my arrival were rather muted.

My father’s two sisters, one older and one younger than him, made it clear they were disappointed my mother hadn’t produced a son for their brother. The lack of appreciation for biology remains and “not being able to produce a male” is still blamed on mothers!

A year and ten months later, my sister arrived. My aunts said my mother had set up a girls’ school in their brother’s home.

For reasons that I have never been able to decipher, they did not resent my sister being a girl as much as they resented me not being a boy. Something to do with the status of a firstborn in the part of the country I come from.

If my father was disappointed I was not a boy, he never let on and did nothing to show that I was anything else but his beloved daughter.

In the end, the boys did arrive and my parents had the same number of boys as girls. Maybe not in the order that they would have preferred, but I think my aunts were eventually reconciled to my existence.

My two aunts, by the way, were tough, fiercely independent, articulate and dynamic women who had a reputation for not shirking from any argument ever.

One of my earliest memories remains a scene of a gathering in the village when the younger one of my aunts, in full flow, (a sight to behold), reduced a grown man, seated among the chiefs and elders, to a stuttering silence.

In other words, my aunts did not let their being female keep them down; so why did they not want their brother to have daughters like them?

Last week, a news item generated from an article published in the celebrated medical journal, the Lancet, managed to share the headlines with COVID-19.

The story said it was being predicted that the world’s population would shrink in the second half of this century.

It is an interesting story that is worth reading, especially the countries that have been identified, mostly in Europe, to have dramatic falls in their population because the fertility rates there are falling.

We in sub-Saharan Africa, according to this study, are predicted to continue in our merry way with rapidly growing populations. Indeed, Nigeria is projected to reach population figures more associated with China and India.

This story hit the headlines days after World Population Day was celebrated on July 11 and was probably meant to tell us we might no longer need to worry about population explosion.

I am not in the least bit persuaded that there is any comfort to take from the proposition that if we in Africa continue to increase our population, other parts of the world would have to rely on us to make up for their falling workforce numbers through immigration.

I have even heard some say this increase in population will make us more powerful!! In other words, the African, the Black person, will become more powerful because our labour will be required in parts of the world whose population has fallen?

If we haven’t learnt anything from 400 years of dealing with the rest of the world, we might be lured into falling for such fallacy. Africans were taken in chains to the Americas 400 years ago as migrant labour.

After the Second World War, the British invited the descendants of freed slaves in the West Indies to come to the UK and work as migrant labour. Read up on the Windrush story and find out what happened to those who went and their children and grandchildren.

During this current crisis, our young people who are providing labour in the Gulf States and Lebanon are stranded and need to be brought home. We have always provided labour and it hasn’t enhanced our situation in any way.

I would much rather we manage our population growth to match our economic growth and not dream about the export of labour for income generation.

This is a very roundabout way to lead me to what has been agitating my mind during this year’s celebration of World Population Day, the phenomenon of male sex preference in our society. Often, couples end up having far more children than they would have because the preferred sex child, often male, hasn’t arrived.

Nature often displays a perverse sense of humour and some people end up with four boys, while others end up with six girls.

The East Asians took their preference for boys very seriously, the extreme example, of course being China, where the government’s imposition of the One-child policy ended up in everybody wanting a male child as their one-child and they now have a lopsided male-female population.

We in Ghana do not get to the point of drastic interventions to kill female infants, but our answer to the male child preference has no better consequences if in wanting males, we end up having more children than we can look after.

It is the prioritisation of boys that led to not sending girls to school or letting them drop out any time there was pressure on the family budget.

Gradually, ever so gradually, the girls are now going to and staying in school and are demonstrating that it is in the interest of the country and the economy, especially, that we educate the females, as well as the boys.

We just need to take the next crucial step and accept that we don’t need to have more children because we want boys. Let’s just admit we need females to make our lives run.

We shall be able to better manage our population if we put the same value on the birth of girls as we do on boys.

Some people will doubtless end up with two girls, but others will have two boys. Nature has a way of making things even out in the end.

The author, Elizabeth Akua Ohene, is a Ghanaian journalist and a politician.

My Boss, H.E. John Dramani Mahama, Leader of the NDC and soon to be reinstated as President of the Republic,
MORE:  President Akufo-Addo Commissions Suhum Interchange
Thank you for your kind...
Read more

The world is currently confronted with one of the biggest human crisis, the novel Coronavirus infection (Covid-19). The virus which first broke in China...
Read more
Top Stories

The Member of Parliament for the Awutu Senya East Constituency, Mavis Hawa Koomson has admitted firing gunshots at a voter registration centre in the...
Read more