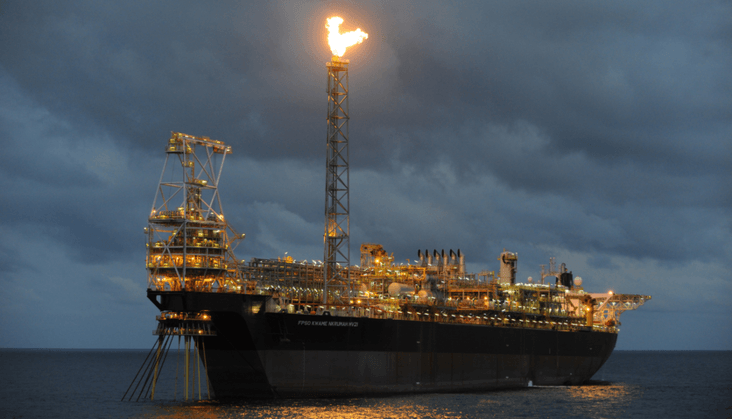 Ghana is seeking parliamentary approval to borrow as much as $1.65 billion to accelerate oil and gas exploration by acquiring and developing assets.

The investment push comes after Exxon Mobil Corp. pulled out of an offshore prospect in the West African country in May, dealing a blow to its burgeoning oil and gas sector. There are also rising concerns that the push for lower-carbon energy may reduce the value of Ghana’s hydrocarbon resources over time.

The nation estimates it will need as much as $1.3 billion to buy a 37% stake in the Deep Water Tano/Cape Three Points asset operated by Aker Energy AS and 70% stake of the South Deep Water Tano field operated by AGM Petroleum Ghana Ltd., according to a parliamentary proceeding on Monday.

The time has come for Ghanaians to “become masters of our own destiny when it comes to our oil and gas resources,” Charles Adu Boahen, Minister of State at the Ministry of Finance, told Bloomberg by phone. “There will certainly be the demand for fossil fuels in countries outside of the West that will continue to use diesel- and petrol-fired cars and consume power generated from fossil fuels for the foreseeable future,” he said.

If approved, the stakes would be acquired through the Ghana National Petroleum Corp. subsidiary, GNPC Explorco.

Aker Energy is also in protracted talks with authorities to reduce the development cost of its Pecan oil field, for which Ghana is now seeking to borrow $350 million to cover capital expenditure, bringing the total funds required to $1.65 billion.

Ghana’s Finance Minister Ken Ofori-Atta warned last week that the country could be “left with stranded assets,” if it didn’t accelerate exploration amid the transition to renewable energy. According to BloombergNEF, nine of the world’s largest international oil companies sold $198 billion worth of assets from from 2015 to 2020 in a bid to decarbonize for the long term.

The new strategy for the country to “become an operator in its own right” may require a legal amendment to allow the state-owned oil company to enter into reserve-based lending transactions, which could raise financing without putting further pressure on the government purse, Ofori-Atta said in his mid-year budget speech on Thursday.

Ghana’s public debt already stood at 77.1% of its economic output by the end of June. A shortfall in oil receipts and the fallout from the pandemic pushed last year’s budget deficit to 11.7% of gross domestic product, compared to an initial projection of 4.7% for 2020.