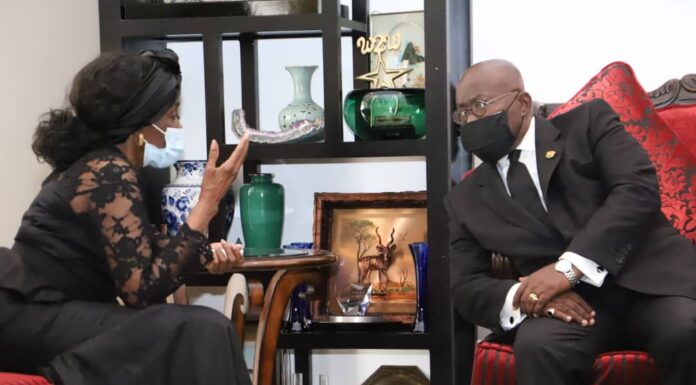 The president made these remarks when he visited the residence of the foremr president who passed away on November 12, after as short illness.

“Your role in the establishment and development of the Fourth Republic as the most enduring. Republic of our history is truly exceptional. Ghanaians appreciate your leadership of our nation and will remember you accordingly”.

“For me, I appreciate very much your friendship. Commandant, fare well and rest peacefully in the bosom of the Almighty.”These were the words President Nana Addo Dankwa Akufo-Addo scribbled with his green fountain pen in the Book of Condolence opened at the Accra International Conference Centre in memory of Ex-President, Flight Lieutenant Jerry John Rawlings.

President Akufo-Addo signed the book of condolence after he had led a high-powered government delegation to the Ridge residence of the former President to commiserate with the family.

An atmosphere of grief hovered around the residence with majority of the people in black attire, with the exception of the security personnel who were in their uniforms.
Security was tight and the social distancing rule was strictly observed.

Even though everybody was wearing a face mask, it was very easy to realise how sad they were. Others who could not hold back their emotions shed tears.

In words of consolation to members of his family, including the widow, Mrs Nana Konadu Agyeman Rawlings, President Akufo-Addo said just like the other 30 million Ghanaians, members of the delegation were all shocked to hear of the demise of former President Rawlings.

He said it was difficult to comprehend because the late President was full of energy and was a vital human being “but this is God’s choice”.

President Akufo-Addo said because of his stature and contribution to the country’s development and history, his departure had to be the responsibility of the state.

He added that it was in that vein that the President (he) had the responsibility over the formal announcement of his death to the nation.

President Akufo-Addo reiterated that any arrangements for the send-off would be done by the state because his contribution to the country was enormous and diverse, and the nation must show its true appreciation of his work and output here in Ghana.

She said the family appreciated how the President had so far ensured that the former President received a state burial for which he had extended a lot of protocols and courtesies to the family to ensure “we honour his memory.”

Later in the afternoon, President Akufo-Addo directed that all flags should fly at half-mast for seven days, while the nation mourned the later former President.

Yesterday’s visit to the residence of the former leader to commiserate with his widow and family was reciprocal and accentuated the President’s indication the night before that no resources would be spared to give former President Rawlings a befitting send-off.

In a statement, he said, his wife and he were deeply saddened by the passing of Mr Rawlings.

“President Rawlings was the longest-serving Head of State since our nation’s independence in 1957, and even though it wasn’t always, he and I agreed on many matters of state, I felt that he was trying to do the best he knew and could under his peculiar circumstances,” Mr Kufuor stated.

The statement recalled that when the time came for him to step down as President on January 7, 2001, he obliged.

It said Mr Rawlings tried to contain whatever reservations he had about him (Kufuor) and the government that succeeded him within the bounds of the 1992 Constitution.

“In this regard, whatever doubts his commitment to democratic rule became attenuated and earned him a legacy of contributing to the sustenance of democratic governance of our country till his demise,” it said.

The late Jerry John Rawlings was born in Accra on June 22, 1947 to a Scottish father and a Ghanaian mother, Madam Victoria Agbotui, from Dzelukope, near Keta, in the Volta Region.

He had his secondary education at Achimota School, where he obtained his General Certificate of Education ‘O’ Level in 1966.

He enlisted in the Ghana Air Force as a Flight Cadet and was subsequently selected for officer cadet training at the Ghana Military Academy and Training School, Teshie, in Accra.

In March 1968, he was posted to Takoradi in the Western Region to continue his course.

In January 1969, he passed out as a commissioned Pilot Officer, winning the “Speed Bird Trophy” as the best cadet in flying and airmanship.

He earned the rank of Flight Lieutenant in April 1978.

His promotion to that rank gave him an opportunity to witness what was described as the deterioration of discipline and moral values.

With that exposure, he had hard feelings with the ‘corruption’ of the regime of the Supreme Military Council (SMC) at the time.

On May 28, 1979, Flt Lt Rawlings, together with six others, appeared before a General Court Martial in Accra, charged with leading the abortive military intervention.

When he was scheduled for another court appearance on June 4, 1979, he was freed from custody by some loyal men in uniform.

He subsequently led a revolt, with the help of the military and some civilians, to oust the SMC from office and brought the Armed Forces Revolutionary Council (AFRC) into being.

As the chairman of the AFRC, Flt Lt Rawlings carried out what was called a “house-cleaning exercise” aimed at purging the armed forces and society of corruption and graft.

The exercise was also meant to restore a sense of moral responsibility and the principles of accountability and probity in public life.

On September 24, 1979, the AFRC handed over power to the civilian government of the People’s National Party (PNP), led by Dr Hilla Limann, who was elected President in a general election.

However, on December 31,1981, former President Rawlings, dissatisfied with the turn of events, again led a section of the armed forces to overthrow the PNP administration.

The PNDC, composed of both civilian and military members, was established, with Flt Lt Rawlings as the Chairman.