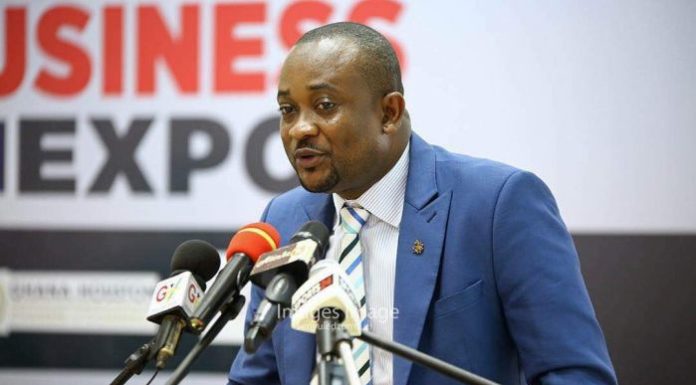 Pius Enam Hadzide says the dramatic Newsfile showdown where host, Samson Lardi Anyenini, asked him to point out from the NDC’s Green Book the projects that do not exist yet had been included in the book to deceive Ghanaians, was a “simplistic and pointless” exercise.

Narrating what actually happened on the show to Paul Adom-Otchere on Good Evening Ghana on Tuesday, June 16, the embattled deputy information minister stated that he appeared on the show to point out to Ghanaians the unprecedented achievements of the ruling NPP over the past three years.

He explained that on the Newsfile show, he was telling the NPP story that generally the Akufo-Addo administration has achieved 78% of promises made to Ghanaians in their manifesto with specific reference to infrastructure.

Enam Hadzide indicated that he was telling viewers of Newsfile some significant changes the government has done in the Railway sector when he was diverted by the host, Samson Anyenini to discuss the NDC’s Green Book, “…but I thought that it was rather simplistic and was pointless”.

Hadzide told Good Evening Ghana that he has had a similar engagement on a different media network where his intended information sharing became a banter between the NPP and the NDC. So, going to do the same exercise again on Newsfile would have shifted his focus from the “objective I have set for myself”.

When the Good Evening Ghana host asked whether he was able to identify some of the phantom project(s), Pius Hadzide said: “I actually identified several phantom projects in the book and actually on the set,” but the NDC rep who was Felix Kwakye Ofosu disagreed with him.

“If you check page 68 of the Green Book, I pointed it out that they had put a picture representing the Ada Sea Defence Project…that picture is not from Ada, it was taken in a village in Anloga which I visited myself,” Hadzide said.

He explained that what is in Ada is unbefitting of a sea defence project, hence the decision by the NDC not to display that picture in their Green Book.

“They deliberately, knowingly went to take a sea defence picture in Anloga and presented it to the people of Ghana that [it was a] sea defence in Ada,” the deputy information minister stated.

Hadzide added that on the same Newsfile show on Saturday, he pointed some artistic impression of the Atuabo freeport which the NDC claimed was a real project built and handed over to the NPP administration.

“If we are talking about the manifesto or a book advertising your intent and you brought artistic impression, I can understand but the Green Book is supposed to advertise your achievements; so you don’t have to give us artistic impressions,” Hadzide charged.

After Newsfile on Saturday, Hadzide indicated that NDC viewers of that particular show started trolling him on social media, “but I’m not worried.”

Pius Enam Hadzide said the people of Ghana in 2016 rejected the Green Book of the NDC so as deputy information minister, he was compelled to tell the success story of the NPP and “to look into the future.”

“I was prepared to engage in a discussion to the effect that, look we have shown competence that we can build an economy and are building infrastructure, investing in human and social capital like the free SHS.”

MORE:  We will treat the lockdown with humanitarian face - Police

He said further that the NDC on Saturday proved to Ghanaians that they were practising ‘troll farms” where some functionaries of their party presented themselves as having the majority opinion on social media.

“I didn’t want to dwell in the past. The NDC still can’t find the message, they can’t find a running mate; I wanted to focus on the present and focus into the future,” the deputy information minister said.

A press statement released on Tuesday, August 15, said the government has made available to the Receiver of the failed Micro Finance Companies as...
Read more

Cardi B and Offset are officially calling it quits after three years of marriage. The "WAP" rapper (Cardi B), 27, filed for divorce at an Atlanta courthouse on...
Read more

Unofficial reports indicate that at least 14 people have been killed and several others injured in multiple collision at Kyekyewere near Teacher Mante on...
Read more

Premium Surge: Cocoa Farmers in Ghana to Get A 21% Pay Rise?

The spokesperson to the Vice President of Ghana, Dr. Gideon Boako, has reacted to a news item that sought to suggest that a GHC20k...
Read more

Members of the Catholic Church in Ghana have met with excitement the news of one of their priests appointed to the High Court in...
Read more
Entertainment

Kanye West has shared shocking footage of himself urinating on a Grammy Award as he 'goes into battle' against labels Universal and Sony to try and...
Read more
News

Deputy Volta Regional Minister has reiterated that the NDC Volta caucus in parliament, led by Emmanuel Kwasi Bedzrah, requested for military presence in the...
Read more