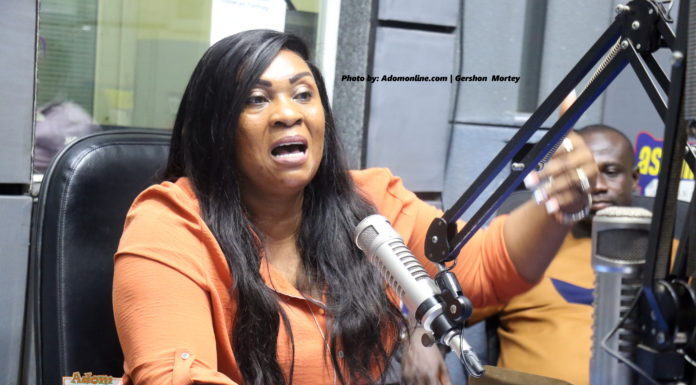 The Member of Parliament for the Awutu Senya East Constituency, Mavis Hawa Koomson has admitted firing gunshots at a voter registration centre in the area.

There was a confrontation at a registration centre in the constituency on Monday, July 20, 2020, which led to gunshots being fired and motorbikes being burnt.

There were reports that the Electoral Commission (EC) officials fled from the scene following the altercation.

The opposition National Democratic Congress (NDC) subsequently accused Hawa Koomson of being behind the violence in the area.

Hawa Koomson subsequently confessed on Accra-based Adom FM that she fired the warning shot in self-defence.

“When I got the information that people were being bused from some places into my constituency, I couldn’t sit down for people to come and register in my constituency and elect an MP for the people of Kasoa…I work with men because I can’t work with women alone in this political enterprise. None of my men had guns on them when we got to the centre, I fired the shots myself. Yes, I gave those warning shots to protect myself,” she said.

Meanwhile, in a separate statement from the office of the Member of Parliament has also clarified on what happened at the registration centre.

“The new clashes between supporters of the two parties come at a time the NDC has made up their mind to go all out to disrupt the registration process by bussing people from Sowutum and other parts of Accra to Awutu Senya East to register. And that mainly accounted for the clashes yesterday at ‘Steps to Christ’ polling station. The Member of Parliament went there to acquaint herself with the issue of the registration of missionaries. As Hon. Mavis Hawa Koomson entered the polling station with her entourage, they saw some motorist who had earlier been seen with the NDC’s candidate, Naa Koryor, at the universal polling station, following and running around the Member of Parliament’s vehicle and attacked her lead vehicle by smashing the taillights and that of the bumper, the said vehicle is parked at the Kasoa Police Station.”

“In an attempt to ambush and prevent her from entering the premises, Furthermore, the unidentified motorists had on face masks, making it difficult to see their faces. The wild behaviour of thugs caused the registrants to scatter because the place had become unsafe. Upon seeing the danger posed by these thugs on motorbikes, who were attacking her unarmed team close to the polling station, the Member of Parliament quickly gave a warning shot in the air in self-defense to scare off the thugs.”

Four arrested after shooting, burning of motorbikes at registration centre

Meanwhile, four persons have been arrested after the shooting incident.

The Kasoa Divisional Police Commander, COP Charles Koosono indicated that the suspects will be transferred to the Regional Police Headquarters in Cape Coast for further action.

“This morning, around 9 am, we had information that there was a confrontation between some people at a registration centre. When we got there, we realised that three motorbikes had been burnt. We arrested four people in connection with the happening at the registration centre. We have seized one gun. We are now investigating the issue.”

The Police Commander said they are still investigating to understand what triggered the confrontation.

The Electoral Commission (EC) has also condemned the disturbances at the voter registration centre.

According to a statement from the Commission, some of its officials were attacked by men who disrupted the registration process by firing shots.

“The Commission condemns such acts during a civil exercise like the Registration of Voters and calls on security agencies to investigate the issue as a matter of urgency to bring the perpetrators to book.”

“These acts constitute a breach of the Vigilante and Related Offenses Act, 2019 Act 999. The Act seeks to disband violent activities of Political Parties and makes political vigilantism an offence punishable by a prison term.”

My Boss, H.E. John Dramani Mahama, Leader of the NDC and soon to be reinstated as President of the Republic,
MORE:  Mahama Chooses Jane Naana Opoku Agyemang as Running Mate
Thank you for your kind...
Read more