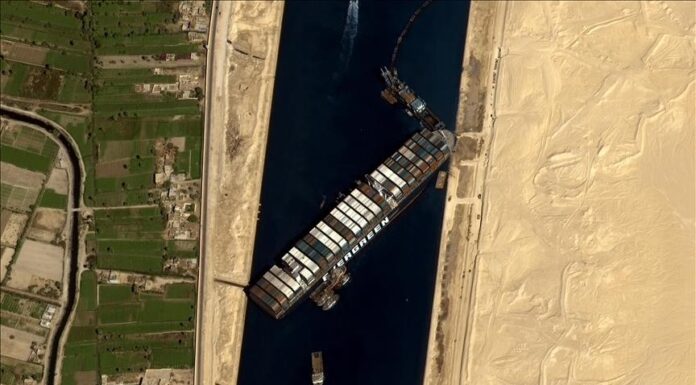 Iranian Ambassador to Russia, Kazem Jalali, proposed activating a shipping line that passes through Iran as an alternative to Egypt’s Suez Canal.

The Suez Canal has been temporarily suspended since Tuesday when a massive Panamanian container cargo ship, Ever Given, ran aground while passing through the new channel in the canal.

Egypt inaugurated the New Suez Canal, which cost $8 billion, in August 2015 as part of plans to revive the country’s economy and restore Egypt’s position as an important center for trade.

According to state news agency IRNA, Jalali called for the acceleration of “the infrastructure and activating the north-south corridor” as a result of “the suspension of maritime traffic in the Suez Canal”.

For years, Iran has been promoting the trade corridor north-south that connects India to Russia passing through Iran, arguing that it is a better alternative to the Egyptian Suez Canal.

The Iranian diplomat said the proposed shipping line “shortens time” and is “cost-saving by 30 percent in comparison to the Suez Canal” hence making a better option to the Red sea route.

“The recent incident proves the need for a less dangerous alternative to the Suez Canal through which more than one billion tons of goods pass annually,” Jalali said.

The Suez Canal is considered one of the most important canals and straits in the world. It is the shortest shipping route between Europe and Asia, and one of the main sources of foreign currency for Egypt.

MORE:  Africa Hits One Million Coronavirus Cases But Experts Say Peak is Yet to Come

As efforts continue in the canal, the authorities say it could take days to weeks to free the ship, raising fears of severe delays to oil supplies.

On Saturday, the head of the Suez Canal Authority, Osama Rabie, said the ship ran aground possibly because of “a technical or personal error”, adding that it will be clear once investigations into the accident are completed.

Rabie also said 321 ships are stuck on the northern and southern sides of the canal.

Many countries, including Turkey, expressed readiness to lend a helping hand to resolve the blockage.

*Writing by Ibrahim Mukhtar in Ankara