Year of Return is Boosting Ghana’s Tourism Industry, But How Much is it Taking from Local People? 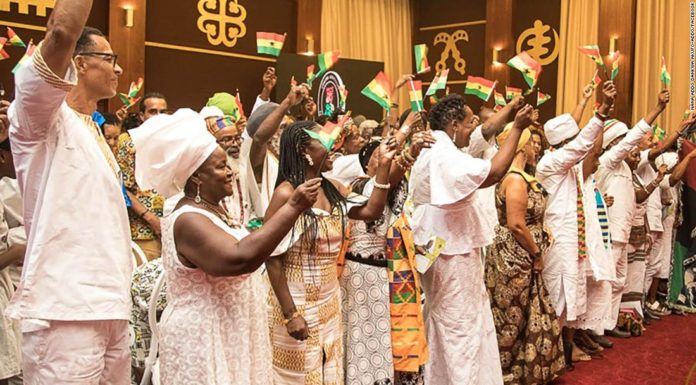 Since August this year, Ghana has been a favourite destination for most people in the diaspora. It’s the Year of Return. Several activities —diaspora talks, film festivals and others— have kept the country busy. The ‘busyness’ is expected to continue till the end of the year (2019) and probably extend a little into the coming year as a plethora of activities have been lined up to last the period.

The Year of Return —a spiritual and birth-right celebration to mark 400 years of the Trans-Atlantic Slave Trade in the history of the black man— was declared by Ghana’s president, Nana Addo Dankwa Akufo-Addo during a speech at the UN General Assembly in September last year. Marking exactly 400 years when the first African slaves reached the shores of Jamestown, Virginia, the president said it was right to welcome members of the Black Diaspora to Ghana where about 70 per cent of West Africa’s slave forts could be found.

“We know of the extraordinary achievements and contributions they [Africans in the diaspora] made to the lives of the Americans, and it is important that this symbolic year —400 years later— we commemorate their existence and their sacrifices,” president Akufo-Addo said during the speech.

Leaders of the project, the Ghana Tourism Authority, say it is one of the President’s key measures of realizing his ‘Ghana Beyond Aid agenda’ which is probably another reason why the president hosted the Full Circle festival last year which brought home several Hollywood Stars.

“…the year will serve as a launch pad for a consistent boost in tourism for Ghana in the near and distant years. Beyond tourism, this initiative supports one of the President’s key developmental agendas in Ghana Beyond Aid. We know that tourism can be a leading indicator to business and investment,” a statement on the official website of the project states.

The Ghana Tourism authority says it is expecting 500,000 visitors this year, a 30% increase from 2018.Checks at regular resorts and hotels in the capital and on the mountainous region of Ghana close to the capital show that they have all been booked up.

“Many hotels in Accra, Ghana are already fully booked in advance for the numerous events and tourist visits in December 2019. Ghana’s Year of Return calling for black people in the Diaspora to visit or move to the country has also influenced the rise in travelling to Ghana,” Africa Facts Zone shared on Twitter.

This means a boost in sales for the tourism and hospitality industry. Reuters reports that Ghana’s tourism industry is estimated to rake in $925m by the end of 2019, a reason why the current administration is highly interested in the agenda.

The atmosphere surrounding the celebration is nothing more than frenzy for both locals and members of the diaspora, although there have been instances of emotional breakdowns when early participants from the diaspora visited some historic sites, with others reconnecting with families they have not known for close to four centuries.

But behind the enthusiasm and the merrymaking that is expected to consume the country in November and December are also some economic implications that have been overlooked.  Although the celebration has been highlighted in just some major cities in Ghana—Accra, Kumasi, Cape Coast and Takoradi—, it is likely to have an economic impact on about half of Ghana’s population, especially lower and middle-income earners who constitute more than half of the country’s total population.

The simple explanation is that, a lot of these people travel to the capital to do their end of year shopping. But they will have to be competing with foreign visitors who probably can afford almost everything, without so much strain on their pockets.

As has been the norm in almost every part of the world where buying and selling takes place, the influx of visitors at a particular time becomes an ingredient for price hikes in goods and services. If past experiences are anything to go by, it is not strange, however, for the same thing to happen in Ghana especially with visitors coming from countries where the currency seems to be much stronger than the Ghana Cedi.

While this may be a big boost to Ghana’s tourism and hospitality industry, one of the unintended consequences is that, it may also put a toll on the pockets of local people. First of all, people who spend Christmas in the city may need to double, or in some cases triple their budgets this year. This may not be as a result of the country’s economic woes but rather because of foreigners bringing in big currencies and forcing local businessmen to price goods and services to meet their (foreigners) taste. But it seems everyone, well, people who care about how they spend their money, are prepared.

“There will be a lot of activities and the prices of tickets will go high, maybe because of the big names coming to Ghana. If you plan to go for most of them, you have to get a big budget,” Akosua, a student at the University of Ghana said.

Another implication may also be that big brands from the diaspora who may invest in Ghana’s tourism industry as a result of the Year of Return may end up overshadowing small and medium scale local enterprises.

If you are able to swerve price hikes of goods, the cost of commuting from one place to another will also be a big deal in December given the number of high-end events that would be patronized by people from different parts of the capital. As per usual, taxi hailing services like Uber, Bolt and Yango will ‘reap their harvests’ as demand will be on the rise. Local taxi services will get what is due them but the issues of safety surrounding their services will hinder their ‘pay day’. While this may not be a problem for foreigners with big budgets, local people who use these services would have to endure the price hikes as transport services wouldn’t have the time to differentiate.

MORE:  Today in History: Kwame Nkrumah dies in Bucharest in 1972

But despite impending price hikes and others, social media, especially Twitter, which has become the new public square for ‘socially elite’ Ghanaians to discuss issues ranging from politics to entertainment has not really done much going deeper into discussions about the Year of Return. Of course, the #YearOfReturn has been trending almost every fortnight, and the discussions have been diverse, but most of the discussions indicate the kind of excitement that the people of Ghana share in the celebration. The mood seems to portray the general mood of the Ghanaian populace about the celebrations and the discussions mostly revolve around opportunities that the Year of Return offers, upcoming concerts or landmark events, with a few others questioning motives.

The mood on social media is generally positive. However, this positivity is probably preventing people from really paying attention to critical issues such as questioning the funding of various activities that are not organized by private individuals. For now, there hasn’t been any clear-cut figure form government regarding the amount of funds that has been pushed into the activities.

For a country that has a lot of tourist attractions spread outside its capital, one would think the activities of the Year of Return will be extended into other regions to secure more economic gains.

However, the indication so far is that the Year of Return is mostly going to be an ‘urban thing’. At the opening ceremony of the Blackstar International Film Festival, the Deputy Minister for Tourism Arts and Culture, Dr. Iddi Ziblim, admitted to the government’s inability to extend activities to other regions but was quick to add that the challenge will be overcomed in subsequent years.

“Basically, I think the Year of Return agenda was purposely design for those in Accra only. Because almost all the events and programs are been scheduled in the Capital city only. My question is, What about the rest of the Region’s in Ghana are they not part of the #YearOfReturn,” said @Dj_Maxta_Prime, a Twitter user.

A press statement released on Tuesday, August 15, said the government has made available to the Receiver of the failed Micro Finance Companies as...
Read more

Cardi B and Offset are officially calling it quits after three years of marriage. The "WAP" rapper (Cardi B), 27, filed for divorce at an Atlanta courthouse on...
Read more

Nigerian music superstar David Adeleke popularly known as Davido has been enlisted among the cast of 'Coming to America 2', an American Comedy film.
MORE:  Elizabeth Ohene Writes: Nature Will Even It Out
This...
Read more

Unofficial reports indicate that at least 14 people have been killed and several others injured in multiple collision at Kyekyewere near Teacher Mante on...
Read more

Premium Surge: Cocoa Farmers in Ghana to Get A 21% Pay Rise?

The spokesperson to the Vice President of Ghana, Dr. Gideon Boako, has reacted to a news item that sought to suggest that a GHC20k...
Read more

Members of the Catholic Church in Ghana have met with excitement the news of one of their priests appointed to the High Court in...
Read more
Entertainment

Kanye West has shared shocking footage of himself urinating on a Grammy Award as he 'goes into battle' against labels Universal and Sony to try and...
Read more
News

Deputy Volta Regional Minister has reiterated that the NDC Volta caucus in parliament, led by Emmanuel Kwasi Bedzrah, requested for military presence in the...
Read more